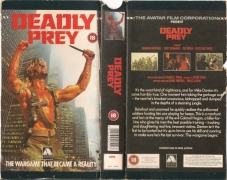 Danton finds himself kidnapped by a mercinary force intent on using him as prey in a human hunt. Unfortunately for them Danton has a grudge against their boss and he’s not going to be the pushover they’re used to. This ode to 80’s action films is about the cheesiest near spoof of the genre I have seen in a very long time but as bad as it is it’s also a hell of a lot of fun.

Got something to say? Go for it!